Highlights from Love has no borders, the Show, in Lausanne Flon for the “Carte Blanche”, 2017.

We are 4 musiciens from 4 continents : a French singer, an American pianist, a Mexican saxophonist, and a Japanese double-bassist. And we all have a double-background, mastering the jazz and classical repertoire at the same high-level. Curious by nature, and very creative, we wanted to do something that looks like us, and to create a recital that is different from what we usually see : a singer and the pianist, both static, in a classical lieder-abend evening. So we worked on a semi-staged recital, in which each musicien is a character, and sometimes the public is one too. This recital is more like a “show”, it is alive, it can be surprising, and it creates a real connection between the stage and the audience.

Moreover, we wanted to deliver a message through the repertoire we chose. We tell a story, a story about love, in 5 different chapter : The loss of love – The seduction – The solitude – The impossible love – The eternal love. To do so, we are using different languages and different genres : from opera to Jazz, from lied to chanson or cabaret.

We believe exploring those different vocal and musical worlds is enriching, because music has no borders. BORDERS are everywhere those days : moral, mental, physical or social ones. They can be walls, barriers that divide people and seem hard to be overpassed. With this recital, we try to build bridges above the walls that are being erected around the classical music, in order to gather people. Music is a universal language, accessible to everyone.

What makes this recital/show successful too is that it can be adapted : shorter or longer, the repertoire can be modified according to the country we play in (more german, more english, more classical, more jazz etc…), it can be played with the three or the four of us, and it can be adapted for little concert-halls to giant open-air stages. 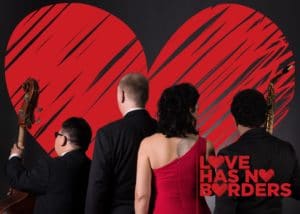