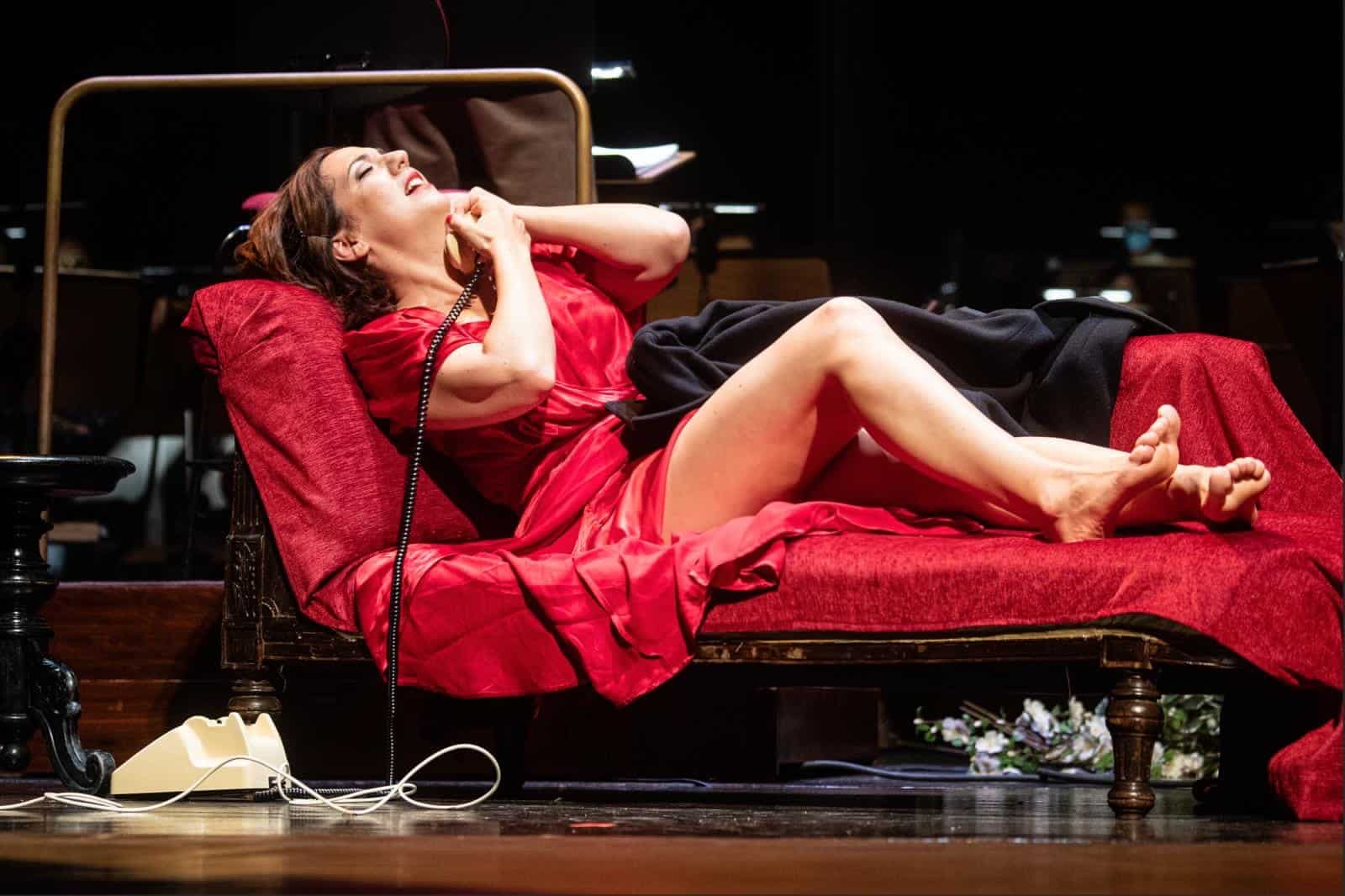 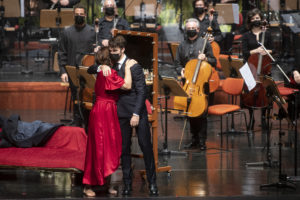 “Marina Viotti lives her character with rare intensity. We know the singer’s eclecticism, as at home in bel canto as in lied, melody, French opera, song, jazz or … metal! But that during a single evening, the same performer passes with as much ease from the French classical song to the lyricism of Poulenc before concluding with the tender melody of Chaplin leaves us speechless, both the aesthetics of the pieces performed, but also the vocal techniques requested are different… The transition between a “Padam” full of energy and banter, irresistible of ardor and liveliness, sung at the microphone, and the first sentences of La Voix humaine is absolutely amazing.”

“Doing pretty much what she wants with her voice, the singer is able to lighten her warm mezzo tone, including in the treble, down to the tiniest piani, to translate the character’s hesitations, her modesty, its fears, its asides – or to inflate it to give a striking scale to the climaxes of the monologue (the “I became mad”, the upsetting “I love you” which concludes the work…). The slightest inflection carries meaning (the painful affection placed on the words “my beautiful darling”, the voice that suddenly whitens when “She” evokes “a weapon that leaves no traces”, …); and the text is said with such naturalness and clarity that it would seem, on more than one occasion, that the performer is speaking rather than singing …”

“She opened with Satie’s Je te veux, singing with lyrical ease, soaring to a bright soprano.  In Dumont’s Mon Dieu, she incarnated a torch singer, pouring out both desperation and heartfelt feeling.  This was followed by a rendition of another Piaf classic, Padam, padam, sung with captivating abandon, the text spat out fiercely, the unbearable tension of the waltz pulling us inexorably along for the ride.  The coda of Padam, padam led straight into the harsh opening measures of La voix humaine, giving us both a musical shock and leading us into the darker place of the opera itself.”

“Despite the simplicity of the setting, the evening had significant impact due to the vividness of Viotti sœur’s acting and her remarkable use of text.  Whether desperately folding herself over in mental pain singing into the phone, or lying on the chaise longue reflecting on physical closeness with her lover, Viotti sœur took us deep into the heart of Elle’s situation.  She achieved this through employing a rainbow of vocal colour, and also precisely through that outstanding clarity of diction.  Whether in the way she drained the colour from the tone in ‘bonsoir Joseph’, giving us a sense that she knew that this would be the last time she’d speak to her lover’s servant, or the numbness with which she recounted her overdose.  Viotti was also alive to the lyricism of the role, pouring out streams of silvery tone, yet also negotiated the quickfire parlando with impeccable accuracy of pitching.  Similarly, Viotti had clearly mastered the vocal range of the part, rising to an impressive high C and negotiating the passaggio with ease, the registers even throughout.”

“There was another unexpected surprise because following the Salve regina, Viotti sœur gave us an a cappella rendition of that old-time classic Smile, accompanied by the Orquestra Gulbenkian, this time singing rather than playing, in impeccably-tuned harmony.  Viotti gave it a vulnerability combined with determination that felt so real and so necessary in these incredibly hard times” 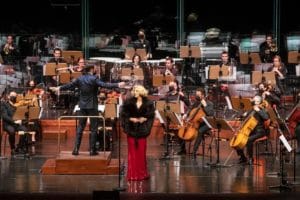 “To interpret this monodrama, you need a singer capable of tenderness, gentleness, but also cries, vehemence, and an actress. Marina Viotti manifests all of these qualities and more.”

“In her silences, her questions, she manages to bring the character of the absent lover to life, to bring out the tender waltz of happy memories. The singer’s commitment, dressed in a bright red negligee, never gives way, with a fierce desire to proclaim her love, making explicit the comment of an analyst: “It is a heartbreak, a sacrifice, which must be played permanently on stage, a little as if we took pleasure in tirelessly reopening a wound that is struggling to heal ”. The voice of the young mezzo is full, rich, nuanced, powerful, that of a lyrical tragedian.” 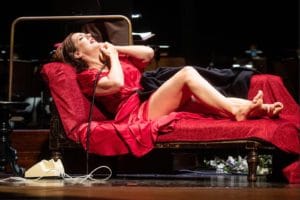