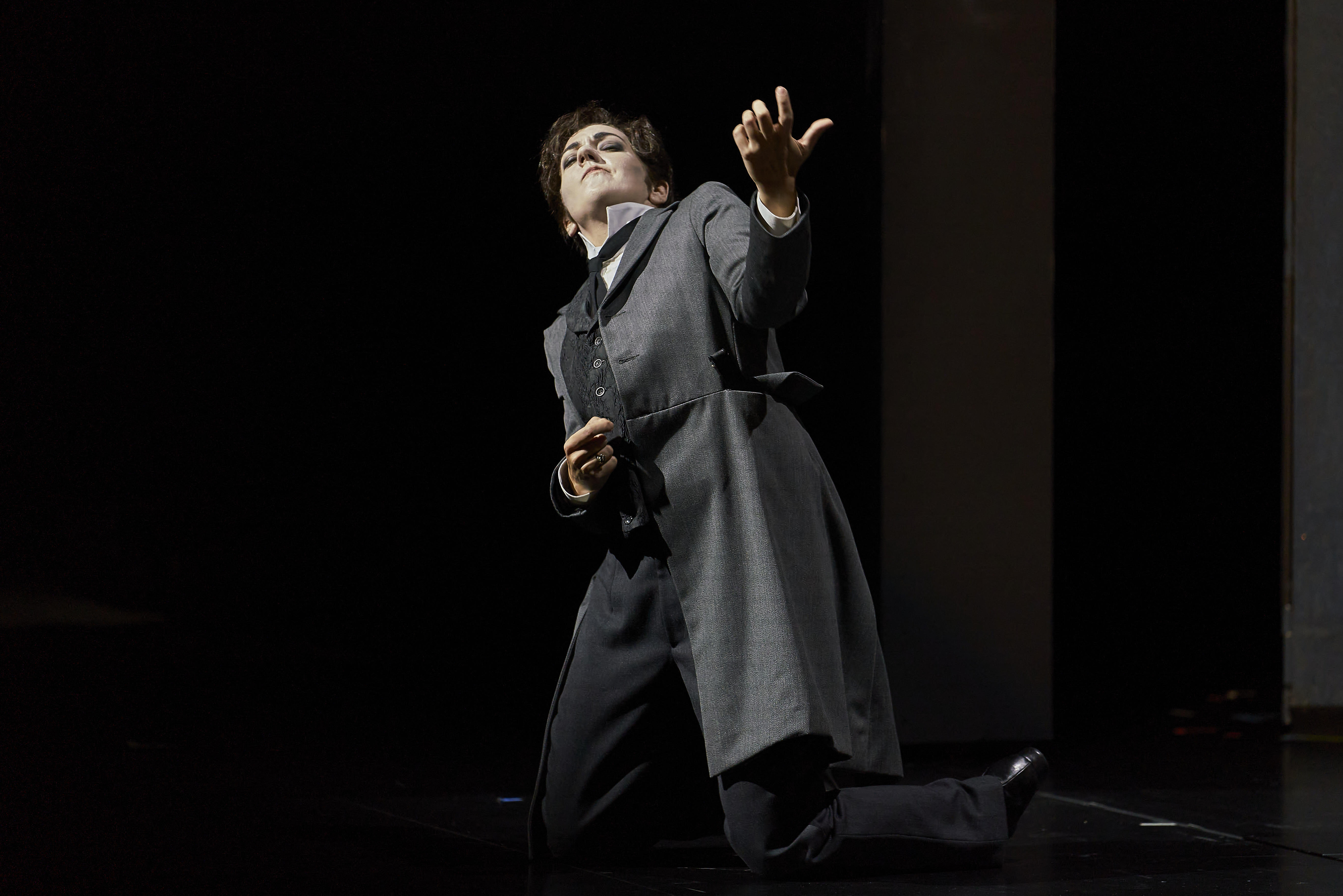 “mezzo-soprano Marina Viotti  was the sensation of the night. As usual, while Nicklausse, Viotti also assumed the part of the muse, the first character to appear in the entire opera. The irruption of Viotti as that muse that comes out of a barrel, of the happy Hoffmannian drunkenness, was but a harbinger of the wonderful evening that was going to take place. As a muse, Viotti had a ravishing presence; As Nicklausse, the mezzo-soprano was a nerve that energized the scene, true to the character’s carefree joviality. Vocally, Viotti exhibited a voice with a beautiful timbre, burnished and warm at once, always solid in the emission, dense, but distinguished, all this combined with a singing line of exquisite taste. With these assets, Viotti made the most of the possibilities of a less secondary character than it seems at first glance.”

“Marina Viotti, is an excellent performer of the Muse and Nicklausse in the first cast. Alter ego and attentive interlocutor of Hoffmann, this character demands from the artist not only a continuous stage presence, but also colors specific to each act and to the sometimes comical, sometimes moralizing or tender dialogues that she maintains with the tortured poet. Marina Viotti has all the qualities required. The performer knows how to find the sensuality suited to the role of the Muse and his clear and dynamic voice also goes wonderfully with the character of the young student. We thus enjoy hearing him perform the very beautiful tune “O dream of joy and love” rarely given. In “See, under the quivering bow”, where, under Nicklausse, point la Muse, she knows how to combine seduction, length of breath and beautiful highs. At the very end, it is on his shoulders that falls the task of closing the adventure in style with a song that still unfolds its beautiful lines”

“The night we discussed there were two great winners: Marina Viotti as La muse / Niklausse and Ermonela Jaho as Antonia. The character of Nicklausse is one of the fundamental supports of the whole work since he takes part in all the acts and Viotti knew how to take advantage of the occasion to show off a voice placed with precision, with a dark and beautiful timbre and that he especially wore in the two interventions of The muse, especially in La vérité, dit-on, sortait d’un puits, where the conjunction with orchestra and conductor were perfect.”

It was announced for the wonderful role of Niklause and the Muse, the exquisite Stéphanie d’Oustrac, but Marina Viotti who sang in the second cast has moved on to the first and I have to say I really enjoyed it. Maybe at some point I’d like a more resounding bass, but the center that’s generous is so beautiful and she plays so well, that I soon forgot about the one initially planned. She sings with a lot of expressiveness and the singing line is very elegant. Magnificent in all the interventions but especially delicate in the beautiful aria of Antonia’s act “Vois sous l’archet frémissant”. As she also plays the role of La Musa, she closes the opera in a glorious way with the very inspired “Des cendres de ton cœur”. Brava

“The magnificent work of mezzo-soprano Marina Viotti also deserves a special mention in the double role of La Muse and Nicklausse, a less splendid role than the tenor or bass, as it often remains in the background, but very long and demanding too”

Special mention deserves the mezzo Marina Viotti, in the role of Musa and Nicklausse. It is a role that opened in this production. Musicality in its purest form.

“but in the female cast, we must highlight the performance of Marina Viotti in the role of Nicklausse and the Muse, with a beautiful stage presence, poetic and always efficient both stage and musically.”

“The continuous presence of Marina Viotti was noted, accompanying Hoffmann as her friend Nicklausse and as La Muse, who closed the opera with a beautiful “Des cendres de ton cœur”.”

“Of the ladies, Viotti clearly stood out for voice and acting, such as Nicklause or Musa … she was one of the few who received applause at the raised curtain … Also, except for two performances, she has the exclusive of the role.”

“remarkable Marina Viotti in the role of Musa and Nicklausse. Very delicate was the well-known barcarola she sang with Surguladze and also her final song with a defeated Hoffmann at her feet”

“He was accompanied by the mezzo-soprano Marina Viotti’s Nicklausse in a accurate performance, with a strong and very expressive center that deserved more applause in the aria “Vois, sur l’archet frémissant” and who concluded the performance with a beautiful cradle “Des cendres de ton coeur”.

“Of the rest of the wide cast, the interesting mezzo-soprano Marina Viotti stands out as an agile and awake Nicklausse and as the Muse”

“Also very applauded Marina Viotti with her Musa / Nicklausse, of an exquisite and omnipresent delicacy.”

To be noticed : the Muse and Nicklausse of a fantastic and resolute Marina Viotti

From the rest of the wide cast, the interesting mezzo-soprano Marina Viotti deserves to be highlighted as an agile and alert Nicklausse and the Muse

“Marina Viotti is also great, mezzo-soprano with a warm, velvety, amber voice, but easy and clear in the high pitch: she is reserved for the best finds of Kaye and Keck, the aria of the Muse in the prologue, the arioso of Niklausse “Vois, sous l ‘archet fremissant ”in Antonia’s act and the nostalgic and dreamy finale, accompanied by the chorus. ”