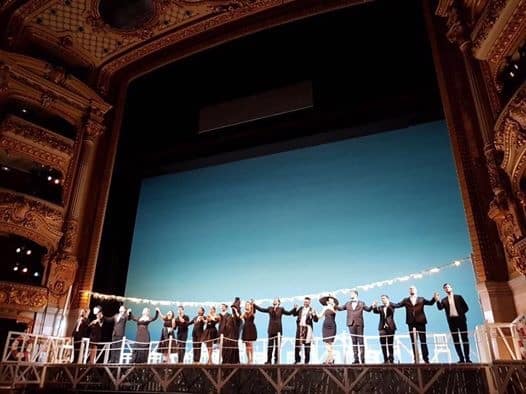 Yesterday was an evening of many Premieres.

Premiere in a big and famous theater : The Gran Teatre del Liceu (will my voice fill this hall? pass the orchestra?).

Premiere as a Melibea (a quite tricky role, going very law and very high a the same time) in the Viaggio a Reims.

Premiere singing at the side of famous and experimented singers (and particularly a long duet with Lawrence Brownlee).

The project of this Viaggio was actually a first : The Liceu wanted to give an opportunity for young promising singers (16 of them) to sing in such a venue, and at the side of famous experimented singers (8). Indeed, the public would never see the same cast, because they would mix it every night. I, for instance, had one show with Brownlee and one other with Segkapane.

We had one month to make this happen and the process was very enriching : the young cast started with one week of rehearsal to do the whole staging of Emilio Sagi. I was curious to see what the level and the atmosphere would be with so many singers in one place. To be honest, I was worried : 16 SINGERS??? ONE MONTH? OMG DRAMA COMING SOON !

But I got a nice surprise in both cases : an outstanding level and a great atmosphere : we were all from the same ages, so we had many things to share, and went out together, ate together, went to the beach together, and not once had a problem with one of the 16. This helped to build a really complicity between each others on and off stage, and there was a great energy that the public could feel at our General.

Then the other cast arrived. Though I’m not a big fan of sitting and watching, I must say we learnt a lot doing so, watching them, how they managed their voices, how they “saved it”, how they got the staging very fast (three days) and always relaxed. The atmosphere was very different though, with strong personalities and maybe a bit less interaction (most of them being already with their families). I was happy to see that they also could learn from us, the challenge we gave them with our freshness, the risks we took, our energy.

I found interesting also to compare what each singer gives to his character, vocally and scenically.

To mix both casts was a super good idea. I would have like to have more rehearsals as a mix cast (we rehearsed mostly the young cast together and it was my first time doing the whole opera with Brownlee for my Premiere) but I have to say, the organisation was very good, and we had a nice and competent staff/administration.

Being led by maestro Sagripanti (and his very precious advices, his precise work during rehearsals) and maestro Sagi (his good mood, kindness, and the freedom he gives you on stage) swell as his assistant Diniz, was making the quality of work at a high level.

The fact that my character was a bit nymphomaniac and alcoholic, going to the first sestet in a robe for a rehab but drinking all the time, and then being very elegant and sexy…helped me quickly to feel at ease with Melibea ! I mean, who goes to work in a robe anyway?

And guess what hairstyle did I got? The usual neck-bun ! I don’t know why it’s how most of the stage directors want me to look like. There must be a reason. Already the 5th time! It’s gonna be a tradition soon.

At the end, I was of course a bit nervous, because it was a big step for me and my career, and to sing with people you admire so much such as Lawrence Brownlee was impressive. But I was filled with the joy of this one month, which made me richer as a singer and as a person. And at the end, after my first steps on stage, I forgot about pressure, and just enjoyed every minute of it.

The result is here :